Regular readers of the State of the Nation: K-12 e-Learning in Canada annual reports will recall that in the 2018 edition of the report for the province of Quebec we wrote:

However, a 2017 amendment to the Loi sur l’instruction publique stated:

459.5.3 The Minister may develop and implement a pilot project to test or innovate distance education or to study, improve or define standards in this area.

This provision allows the Minister to authorize a pilot project that would:

As of the 2017-18 school year there were no active pilot projects.

Then in the 2019 annual report we wrote:

During the 2018-19 school year, there was one pilot projects under the Bill 144 provisions currently underway in a Francophone school board.

But had no additional details. In the 2020 annual report we wrote:

During the 2019-20 school year, there was at least one pilot project under the Bill 144 provisions currently underway , but the Ministry was unable to provide any details or data on any pilot project(s).

It wasn’t until the 2021 annual report that we were able to indicate that:

There are two pilot projects under the Bill 144 provisions currently underway, one of which focused on distance learning. The first pilot project focused on the training of teachers for online teaching, which originally started in 2018 and continued in the 2020-21 school year. This pilot project involved approximately 2,900 students.

At present, one of the pilot projects under the Bill 144 provisions is focused on blended or comodal learning. This second pilot project focused on optional modes of online delivery, in particular a hybrid model that involved broadcasting a teacher in the classroom with a group of students on site, while streaming to students who watch online at distant location. This pilot project involved approximately 1,500 students.

In 2020-2021, 2 pilot projects were in play: The Distance learning Pilot Project started in 2018 which was aimed to provide teachers and students with a quality distance teaching and learning platform and online learning resources (course materials) continued; and,  the pilot project aimed at experimenting and innovating in distance education (FAD) first component called Prevention, which ran from February to June 2021, made it possible to experiment with distance education in comodal mode. The second component, called Innovation (September 2021- June 2024) will expand from the previous component to include comodal winning approaches and incorporate asynchronous teaching.

Later in the document, comodal was defined and described as:

This mode involves one or more students face-to-face and at a distance. The remote student follows the course simultaneously with the students of the class with the consent of all persons concerned, if applicable.

Example 1: A student convalescing at home follows lessons simultaneously with his class. Thus, he keeps contact with his classmates, his teacher while continuing his learning.

Example 2: A teacher who is a specialist in a subject area teaches a lesson to students in his class and at the same time, to several students from different centers of school services or school boards (synchronously)

This mode offers the possibility of following online courses offline (asynchronous) and sometimes take lessons simultaneously with their class (comodal) with the consent of all
persons concerned, if applicable.

Example: A student in a sports concentration who must be absent from school frequently, he then follows its formation asynchronously. When his schedule permits, he connects
at the same time as his class to follow his mathematics course synchronously. He keep in touch with his class.

Interestingly, the document also details a number of other “virtual and bimodal education models” that were present in the province – including providing fairly detailed descriptions of each model, who was operating it, how many students and teachers were involved, etc.. 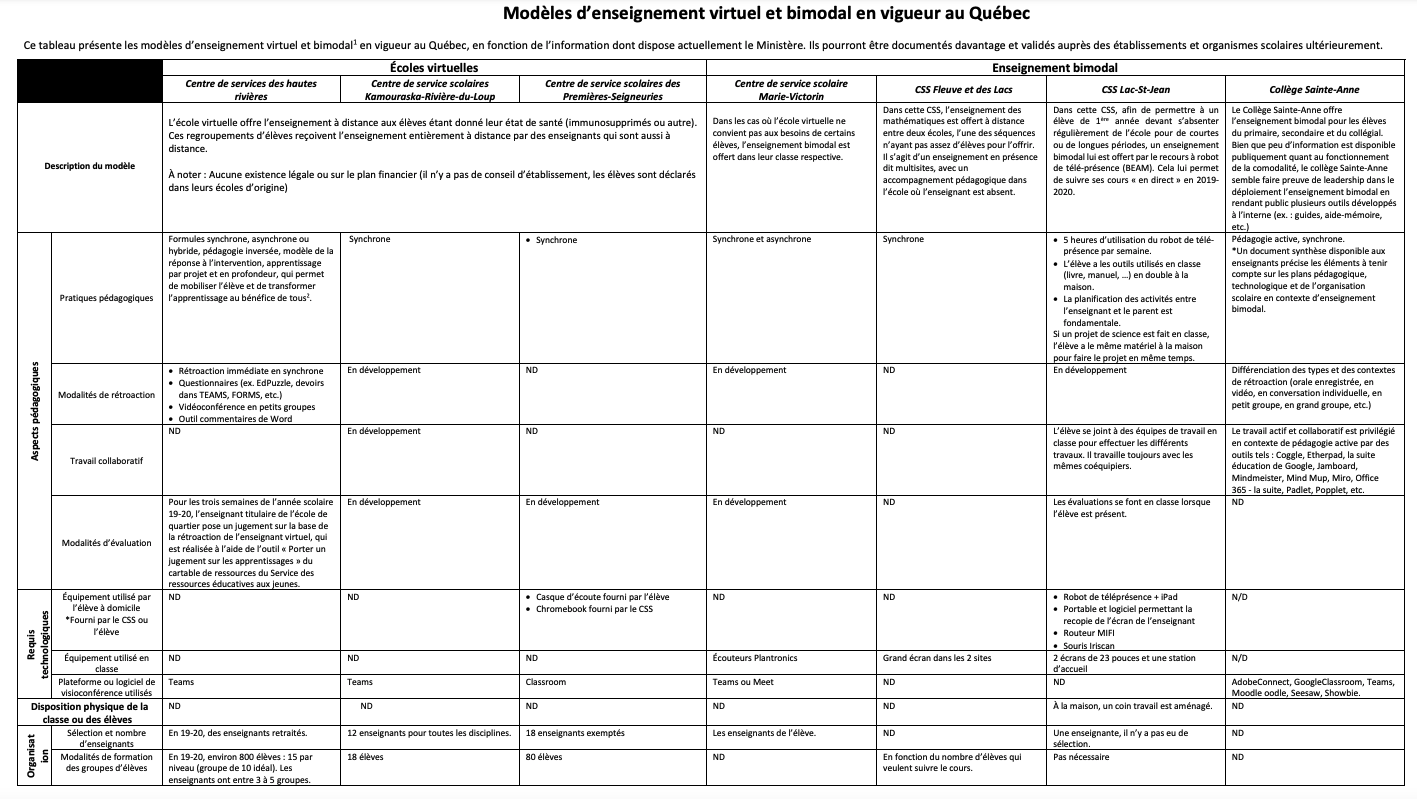 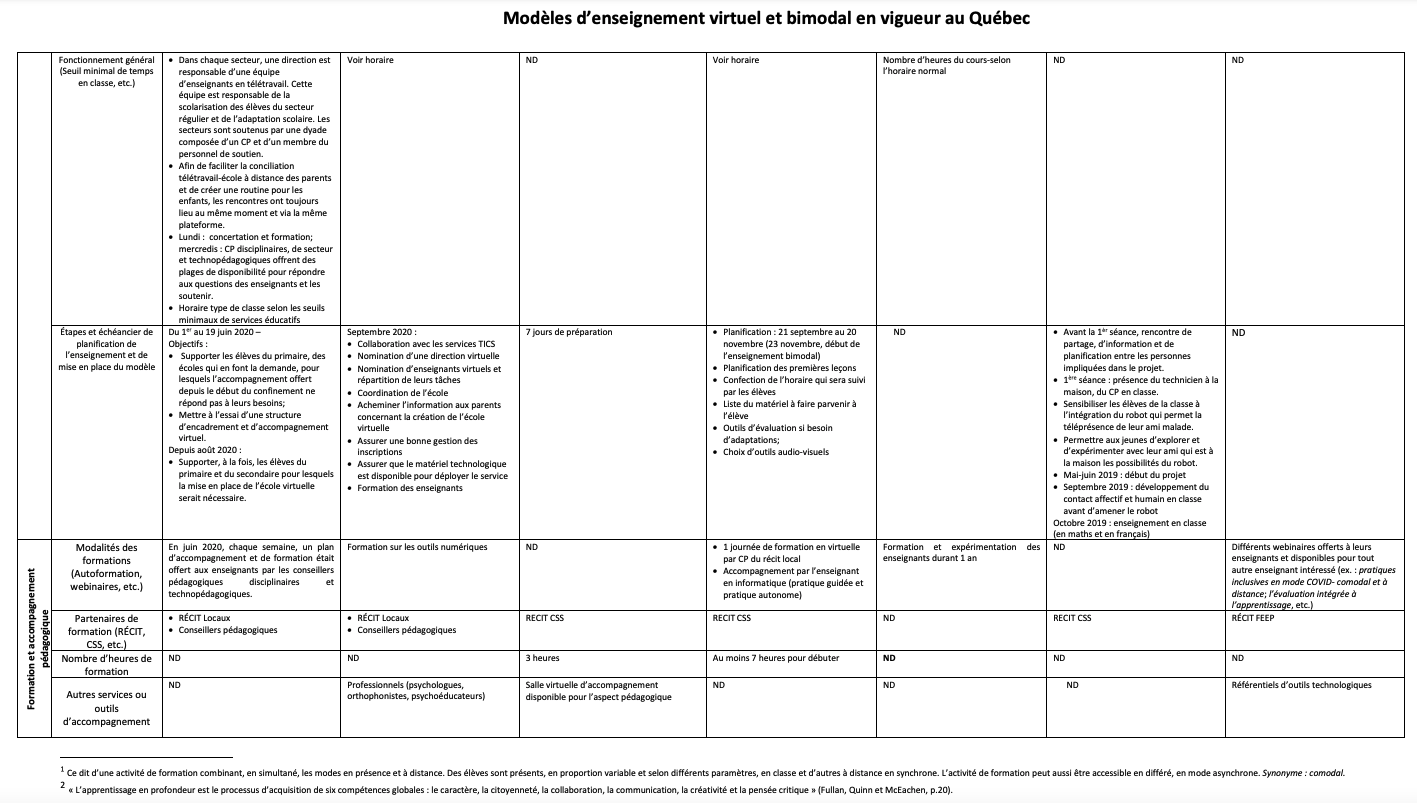 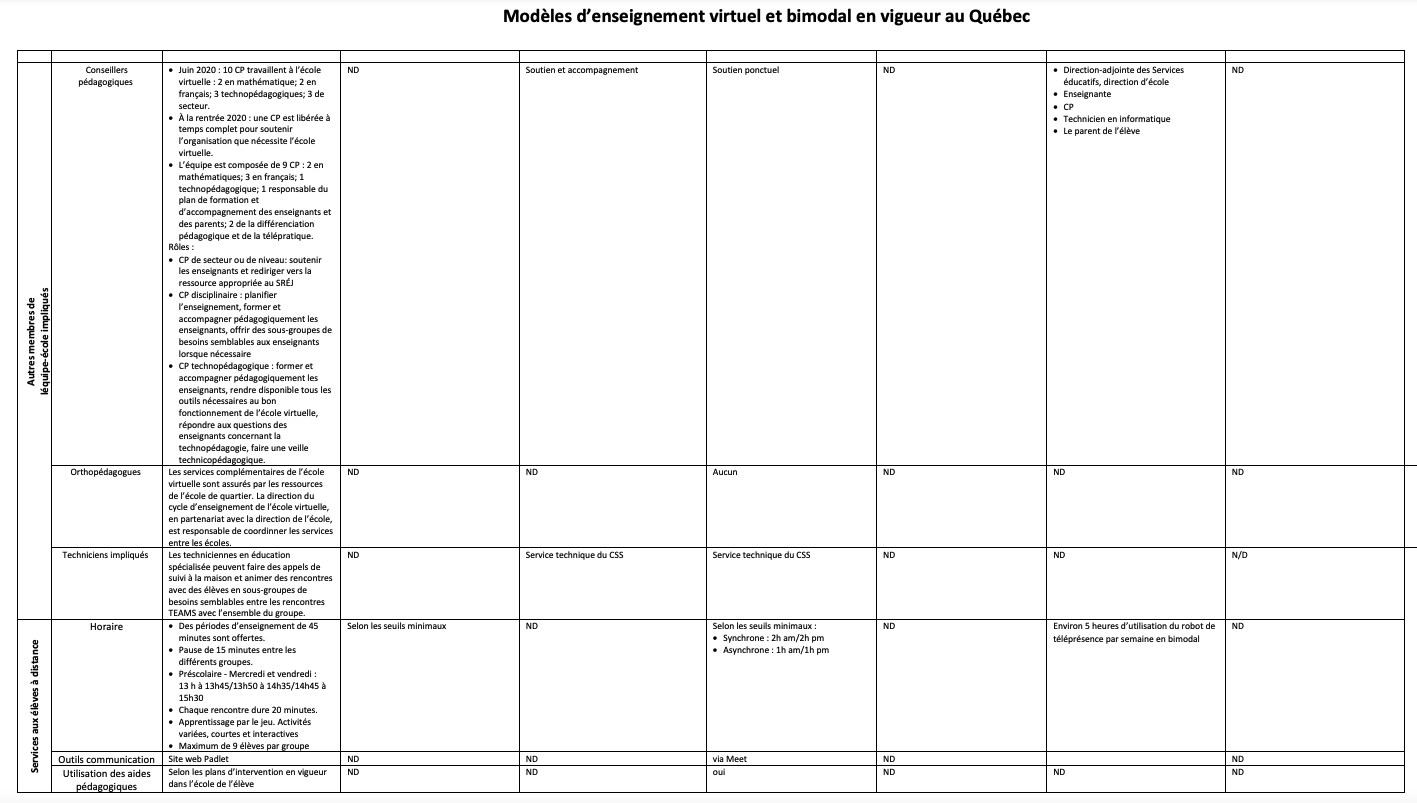 Later in the document there is also a complete list of “projects proposed by the school service centers and the school board participating in the pilot project.”  With this information – along with the data collected through the Ministerial Survey, the Individual Program Survey, and interviews with key stakeholders – it is expected that the Quebec profile in the 2022 annual report will be the most robust and detailed since the project began 14 years ago.