The Sunchild E-learning Community program has seen course completion rates for Aboriginal students of greater than 70% and graduation rates of greater than 80% in each of its 12 years of operations—this compared to graduation rates of less than 4% and course completion rates of less than 20% in northern Alberta public school divisions. The Sunchild E-learning Community program was developed from a “passion to dramatically improve education through Aboriginal people’s inclusion and participation into Alberta’s and Canada’s economy.” 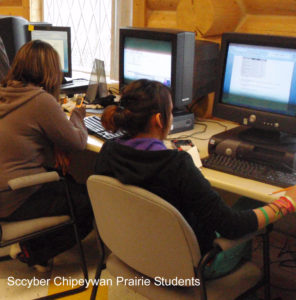 Sunchild was started in 2000 to address the inexcusable graduation rates of Aboriginal students exposed to the traditional “colonial school” model of education. Utilizing the “Sunchild Model” of education delivery, Sunchild delivers educational services to over 20 First Nation community programs from Inuvik in the North West Territories to Piikani First Nation in southern Alberta and many nations between these two locations. Sunchild has been recognized by Aboriginal Affairs and Northern Development Canada (AANDC) for graduating more First Nation on reserve students than all other First Nation programs in Alberta combined.

The Sunchild program began with some 10 courses in the year 2000 to now offering over 80 academic and co-curricular programs, all of which are accredited with Alberta Education towards a high school diploma. Additionally, Sunchild offers post-secondary options through partnering with a variety of post-secondary institutions.

Sunchild is an Alberta-approved private school led by a team of educators with proven leadership skills and driven by a pedagogically successful model of education. The Sunchild program has been recognized provincially, nationally and internationally for its value to society. Recently, it has been recognized as a ‘Changemaker’ with the Ashoka foundation the top project or for student retention from across Canada for the Changemakers Initiative. Also, Martin Sacher, CEO of Sunchild, was awarded by SITE for his outstanding service to ‘Digital Equity.’

We provide 100% live student–teacher interactive teaching sessions, all of which are recorded for easy access and to replay and review concepts. Mount Royal University studied our e-learning model and has determined several key elements in our design and model of e-learning that make the Sunchild model a gold standard for Aboriginal education.