There is a lot of content in this report that does not focus on K-12 distance, online, and/or remote learning, and this review will not focus on those portions of the report.  As such, it was primarily section 2 and section 3 that contained content relevant to our discussion.  Beginning in section 2, the author initially situates the shift from in person instruction to remote instruction quite accurately, and describes many of the problems that were experienced across many jurisdictions.  For example, in the executive summary, the author writes:

In Section 2, this report considers the profound restructuring of teachers’ work that has occurred during the pandemic. During the initial ‘emergency remote learning’ phase from March to June 2020, many students struggled with the disruptions caused by shifting to remote learning, and the ensuing lack of many necessary in-school supports. Academic learning was strained, but more profoundly affected was student mental health, and often, by extension, that of their parents. Teachers within this context grappled with both adapting their pedagogy wholesale to work within a remote learning format, and providing the supports that students needed, amid both top-down directives from the Provincial Government made without consultation, on issues including weekly minutes of synchronous instruction and final grades, and the many new issues for which no guidance was offered and teachers largely relied on the support of their colleagues to improvise. (pp. 1-2)

Readers who are familiar with this space or the field in general know that this description could have been applied to most provinces and territories – as well as US states and other nations.  The system – rightly or wrongly – had never anticipated this kind of extended closure and the preparations that would be needed, not the least of which was that teachers were never trained as a part of their initial preparation or their on-going professional development to teach in these kinds of circumstances.  While governments could have done a better job in their initial responses (see the Canadian eLearning Network’s (CANeLearn) “Pandemic Pedagogy Series” for an in depth examination of those responses across Canada), most believe that everyone in the education system was doing the best job they could under the circumstances.

Where the analysis in this report begins to make a leap of logic that begins to confound the issue of remote learning and traditional e-learning is how it treats the two subsequent years.  Again, from the executive summary, the author writes:

The nature of teachers’ work continued to be transformed during the 2020-21 and 2021-22 school years, with the implementation of measures intended to reduce the risk of contagion, including cohorting, various sanitary measures, and quad/octomesters. These measures required a major reworking of teaching practices to accommodate longer classes, the delay of prep time for months at a time, and the imperative of covering content to prepare students for EQAO standardized tests while spending more time on health and safety measures. Hybrid/fractured learning, in which a teacher is responsible for instructing students both in-person and online at the same time, became pervasive in intermediate and secondary grades across the province, and in some boards even in at the primary and junior level, with the expiration of temporary funding for extra teachers in 2021-22. The hybrid approach has profoundly intensified teachers’ work and general stress, while shortchanging both groups of students due to the teachers’ divided attention. It is widely opposed by teachers’ federations as an unfeasible, unsustainable and pedagogically unsound model. Similarly, parents have witnessed how it degrades teaching and learning. Nevertheless, many educators fear that the cost savings it offers amid the entrenchment of e-learning, mean that it may outlast the pandemic. [emphasis added] Among teachers, many of the measures addressed here have had a particularly heavy effect on the newest educators. These include the disruption of regular access to professional development and informal mentoring by more experienced colleagues, and the role of new and occasional teachers in accommodating rapid expansions and contractions of school board staffing depending on shifts in funding, resulting in precarious employment. It also coincides with concurrent Ford Government policies not directly related to the pandemic, including the replacement of Regulation 274, which provided a transparent qualifications and seniority-based hiring system with one where administrators again have more power and discretion. (p. 2)

Explicit in the author’s analysis of what has been a continued educational response to the pandemic, a transition from emergency remote learning to remote learning, is the believe or fear that what we have experienced during this crisis will become the norm.  It is an assumption that the Government of Ontario implemented Phase 1 of their educational response to the pandemic in Spring 2020, and then began implementing their vision for Phase 4 at the beginning of the 2020-21 school year. 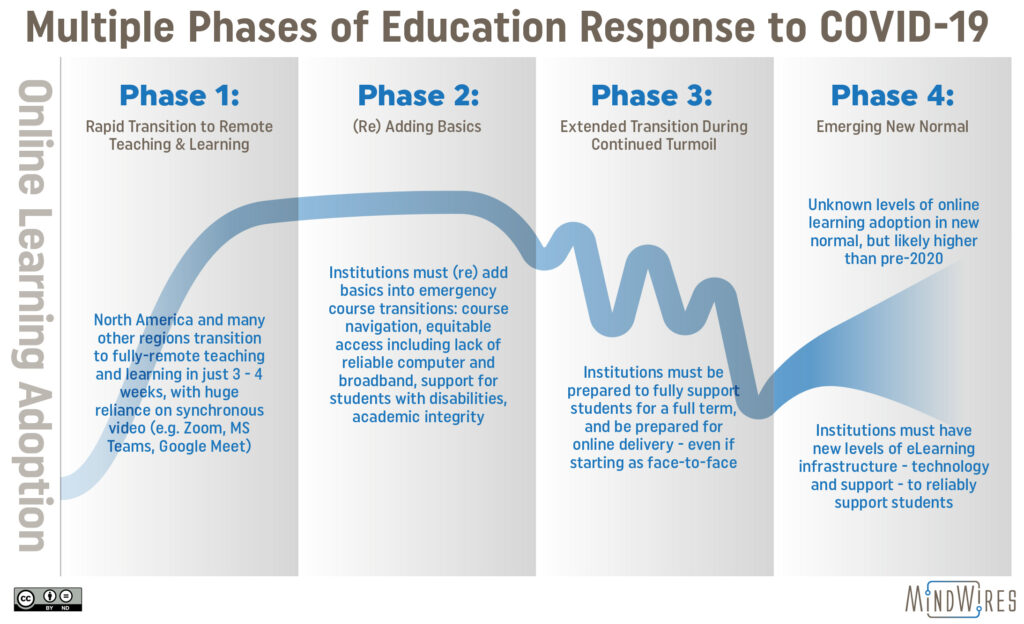 A better description, as least based on what the CANeLearn “Pandemic Pedagogy Series” has revealed, is that over the past two school years the Government of Ontario became stuck in that early emergency response that is often associated with Phases 1 and 2, and has never been able to transition to a point where students, teachers, and the school system were able to seamlessly toggle between in person and remote learning with the same fidelity and quality of learning (as envisioned by Phase 3).  The failures of the hybrid learning model are better seen as shortcomings of the pandemic response by the Government of Ontario, as opposed to some larger scheme to reshape public education.

Interesting, there was no criticism of school boards that failed to support their own e-learning programs in the absence of additional government funded (given that dozens of boards had decades of experience doing just that, so there was no reason why all boards couldn’t have been doing the same).  There was also no criticism of school boards failure to build in process during the in person learning time that would have helped facilitate a more seamless transition from in person learning to remote learning.  One suspects that the criticism was only focused on things that could be levied against the government, which the sponsoring organization holds in ideological opposition.

Shifting focus to the content of section 3, as this is the section that had the greatest potential for raising legitimate concerns about what the future holds for e-learning in Ontario.  Unfortunately, the misuse or selective use of research produced from this project – as well as CANeLearn “Pandemic Pedagogy Series” – was both disconcerting and makes the author appear skewed and predetermined in their approach.  In his arguments around the use of e-learning to privatize public education, the author writes:

Meanwhile, most school districts in Ontario have operated their own e-learning programs since the widespread public emergence of the internet in the late 1990s. These programs have been operated by their own assigned teachers, subject to conditions under collective agreements and mandated per-pupil funding, as with in-person teaching. E-learning programs have been particularly important for predominantly rural districts, especially in northern Ontario and sprawling Francophone boards with small schools that may be hundreds of kilometres apart. In the early 2000s, school districts began pooling resources for e-learning course development, as well as administrative functions for enrolling students, forming the Ontario eLearning Consortium, the Northern eLearning Consortium, the Ontario Catholic eLearning Consortium, and the Consortium apprentissage virtuel de langue française de l’Ontario, for public Anglophone, northern Anglophone, Anglophone Catholic and Francophone districts respectively (Barbour & LaBonte 2019; Barbour 2020). This institutional trajectory resembled processes in other high population Canadian provinces, while the northern territories and some Maritime provinces opted for systems coordinated centrally by the education ministry (Barbour et al 2020). (p. 43)

Unfortunately, the author simply excludes a number of facts from those publications that are inconvenient to the narrative he is trying to develop.

The belief that “the Ontario Government’s decision to move e-learning courses from School Boards to TVO/TFO will put a commercial rather than pedagogical focus on learning and has no rational basis.” is unfounded when one understands that the creation of e-learning courses has not been the responsibility of the school boards for over a decade.  Prior to these pronouncements by the Government of Ontario, the e-Learning Unit of the Ministry of Education was responsible for creating and maintaining e-learning courses.  Those courses were shared with the school boards for use in both online and blended learning contexts through the provincial learning management system.  The teachers within those school boards were able to use, revise or delete that content as they saw fit based on their pedagogical knowledge.

What should be of concern (but is likely to get lost in all of the confounded, skewed and selectively supported assertions), is that “the ‘platformization’ and digitization of education by ed tech companies have accelerated privatization within public education during the pandemic.”  The concerns expressed in this section are well founded, although the solution may be a bit misguided, as the emergence of non-profit alternatives in this space is unlikely in most instances.  The US-based National Education Policy Center has completed a series of research briefs in recent years that underscore these legitimate concerns, and also present some more realistic policy and regulatory alternatives.

Overall, there are many positive aspects of this report.  The examination of the Government’s pandemic response is valid in its criticisms, but unfortunately fails to consider the shortcomings of other partners in the schools sector.  The exploration of the poor implementation of the hybrid learning model is also valid, but that criticism is blunted by the leap of faith that this is part of the Government’s grand scheme to remake public education.  The discussion of the role of TVO/TFO in the proposed future e-learning structure is misguided and skewed, and fails to present an adequate understanding of the existing system.  Finally, the concerns raised over the role of educational technology corporations in the school system is the best supported and the most well founded, but is also lacking by proposing an unrealistic solution.